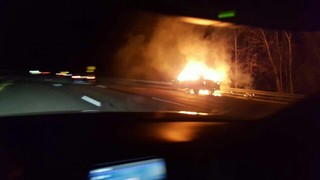 November 17, 2016 - Allamuchy Fire was alerted shortly after 9pm for a vehicle fire at mile marker 17 on Route 80 west. As officers signed on, it was confirmed that the vehicle was well involved.

91-63 was responding within minutes, and arrived on location to find a working truck fire, as well as fire spreading into the nearby wood line.  Firefighters stretched 2 lines to tackle the blaze but found that the gas tank let loose requiring members to shut down water operations and switch to foam. 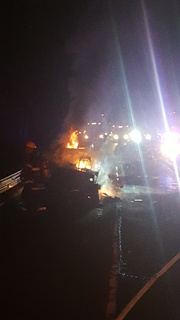 As foam was blanketed down, 91-71 arrived on scene to feed 91-63 with water.  The fire was knocked down in about 15 minutes, and firefighters remained on scene until a wrecker towed the vehicle away.

A Hazmat crew from 22 Fire also assisted at the scene due to fuel entering a nearby storm drain from the water run off.  NJSP and 95 Rescue were also on location with support.