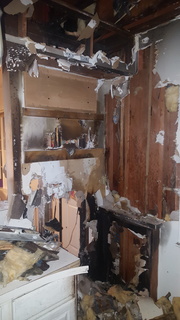 March 22, 2018 - At around 730pm, firefighters were alerted for a possible oven fire in a residence off Yellow Billed Cuckoo. First arriving officers found an oven well involved with fire extending into the walls. A fire extinguisher was able to help slow the spread of the fire, but smoke quickly forced units back.

The call was updated to an active structure fire with fire in the walls. Mutual aid was requested from Hackettstown and Green fire departments to assist Allamuchy firefighters with the blaze. Firefighters off first due engine 91-61, stretched an 1 ¾” handline into the residence and knocked the blaze. Additional firefighters removed the stove from the structure, and began pulling the wall and ceiling to find fire climbing the walls into void spaces.

The fire was under control within 10 minutes, while ventilation and overhaul operations were being conducted.

During the initial size up of the call, Chief Rick Lomonaco located the dog and was able to pull it to safety, while a cat followed along. Units were clear from the scene by 930pm.

In addition to Hackettstown Fire and Green Fire, also assisting Allamuchy was 95 Rescue and NJSP.