Firefighters Battle Back to Back Vehicle Fires 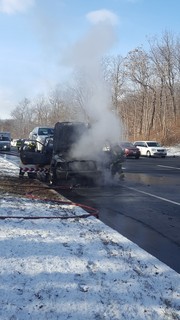 January 15, 2017 - Allamuchy Fire had a busy Sunday afternoon with back to back car fires on route 80.

The first was at around 11:30am on route 80 east when a small duty tow truck caught fire.  Upon arival of first due apparatus, the truck was fully involved, with a car on the flatbed.  Firefighters were able to protect the car on the flat bed, but the truck was a total loss. 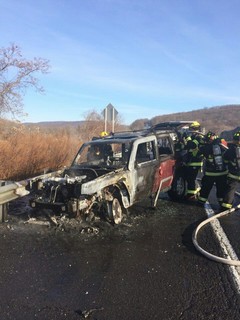 Then at around 1:30pm, a second call came in for another vehicle fire.  A jeep cherackee traveling route 80 west had car issues and got to the shoulder before it erupted in flames.  Firefighters quickly arrived on scene but found the vehicle to be well involved.

Both incidents closed lanes on route 80 for a short time, but all was quickly reopened and firefighters were clear of the scenes in about an hours time.