June 1, 2021 - Shortly before 1pm, the Allamuchy Fire Department was requested Mutual Aid into Hackettstown for a 2 Alarm building fire at 116 Main Street.

Hackettstown Fire Department was initially requested for a possible structure fire, and upon their arrival, it was a confirmed building fire with possible entrapment – resulting in the second-alarm upgrade.  Allamuchy Fire went responding within minutes, as well as many other neighboring departments, to assist the Hackettstown firefighters.

As Allamuchy Engine 91-61 was arriving, they were given the assignment to hit the hydrant and supply water up to the scene.  Members quickly set up the water supply and went to work to assist. Prior to Hackettstown Fire Department arriving, one Hackettstown police officer climbed a ladder to the roof, carrying a fire extinguisher after noticing flames, but was unsuccessful in the attempt to put the fire out.  At the same time, two other officers also ascended the ladder to enter apartments on the building's second floor, locating a two-year-old boy alone in one of the rooms and carrying him to safety.  The child was not injured, though the apartments were deemed uninhabitable after the blaze.

Firefighters battled the blaze, and was able to quickly knock it, placing it under control within an hour.  After about 2 hours, mutual aid fire departments were clear of the scene. 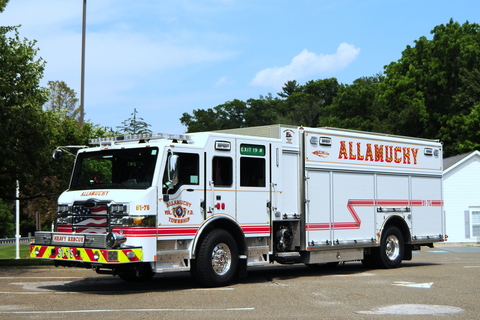