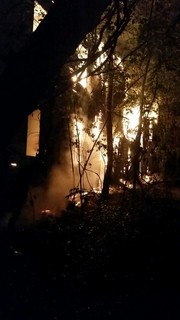 September 26, 2016 – At around 530am, Allamuchy Firefighters were requested mutual aid into Green Township for a working structure fire behind Pub 517. Upon arrival of first due units, an abandoned structure was found fully involved. Five inch hose was laid up the driveway behind the pub, where members from Green and Allamuchy battled the blaze. Numberous other agencies responded to the fire to support with man power and water.

Units remained on location hitting hot spots till about 1230pm. This is the 2nd abandoned structure behind Pub 517 to be found fully involved within a few months apart, the first one occurring on July 21st.

The fire is currently under investigation.