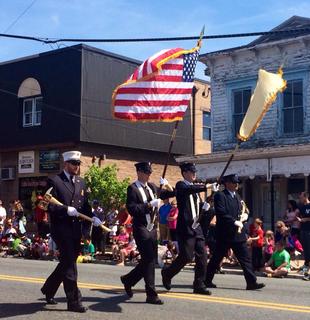 May 26, 2014 - The American Legion Post 164 of Hackettstown hosted their annual Memorial Parade which began near the post office on Washington Street and ended at Union Cemetery on Mountain Avenue.  Allamuchy firefighters participated this year by marching in the parade and handing out stuffed animals to the little…

May 18, 2014 - It is with deep regret and heartfelt sorrow that we announce the passing of Jim Powderley.  As Asst. Fire Police Chief, Jim secured the safety of each of us for many years.  Jim was OEM in Green Twp.  He also was a retired police chief for the Town of Demurest.  Jim played Santa for many Breakfasts and Santa tours.  He was such a special guy and it was a privilege to even know him.  He was dedicated to Allamachy Fire even when his health was failing.  He will surely be missed…

May 13, 2014 — A mid-morning gas leak led to a precautionary evacuation of about a dozen residents in the Panther Valley Golf and Country Club while the gas company worked on the repair, fire officials said.

New Jersey State Police and the Allamuchy Volunteer Fire Department responded to the call of a gas leak at 9:36 a.m. in… Continue 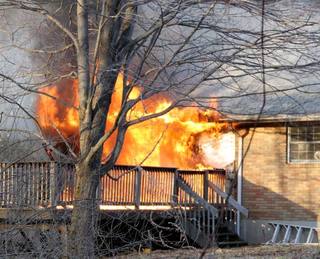 April 1, 2014 – At around 630pm, Allamuchy Fire was dispatched into Blairstown for a working structure fire. Blairstown requested Allamuchy's RIT (Rapid Intervention Team) to respond directly to the scene.
Upon arrival, Allamuchy firefighters sized up the scene and set up their staging area.

The house was heavily damaged due to fire, smoke and water, Losey…

Firefighters Respond to RT80 for MVA 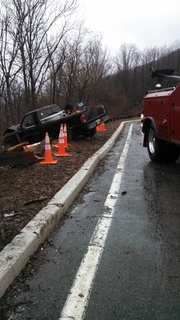 March 30, 2014 – At around 4pm, Allamuchy Firefighters were alerted for a motor vehicle accident on RT80 west with possible injury. Upon arrival, firefighters found a vehicle ran off the road just prior to Exit 19, crashed through the embankment and went off the cliff. Luckily the driver was able to remove himself prior to arrival and sustained only minor injuries. He was… March 29, 2014 – On Saturday morning, Allamuchy Firefighters made their way into the waters of Allamuchy Pond to conduct their Ice Rescue Technician’s practical and become certified in Ice Rescue.  The course was a 1 day lecture and 1 day practical where firefighters learned several techniques of rescuing a victim who has fallen thru the ice.  The course also instructs how to… 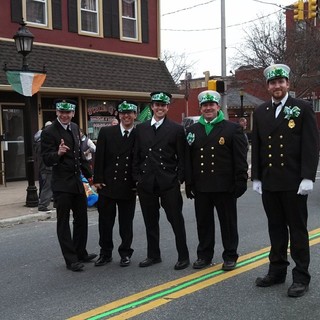 March 16, 2014 - Members from the Allamuchy Fire Department participated in the 6th Annual St. Patrick's Day Parade in Hackettstown on Sunday.  The parade kicked off at 3:30pm and followed the usual route down Main St.  Along with Allamuchy & Hackettstown firefighters, firefighters from neighboring towns, Morris County Pipes & Drums, local township organizations,… 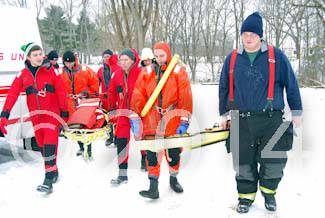 Upon the review, department crews meet at a nearby pond to practice ice rescue techniques. Firefighters conducted self rescues, 1-man… 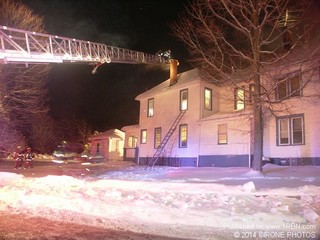 February 9, 2014 -  At around 9pm, Green Township firefighters were alerted of a chimney fire at 111 Decker Pond Rd. As firefighters arrived on scene, company officers performed a size up to discover which chimney was burning due to the multiple fireplaces in the 100 years old home. As crews made… 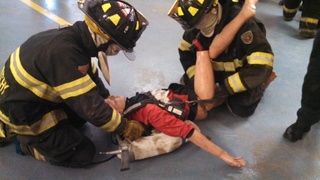 January 11, 2014 - Some of the most difficult and complex fire ground operations are those performed by rapid intervention teams and rapid intervention crews (RIT/RIC) in support of rescuing a missing or downed firefighter. Due to the complexity and “no fail” characterization of these missions, ensuring readiness is of the utmost importance.

As chief officers and… 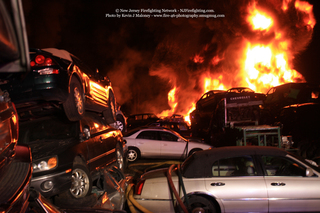 December 30, 2013 — Allamuchy Firefighters were notified at around 9pm for request of their tanker to assist in battling the blaze in Jefferson Township, Morris County. Firefighters, along with 5 other departments of Warren County, were escorted into Jefferson to help fight the blaze.

Santa Clause has Come to Town - Now back at North Pole 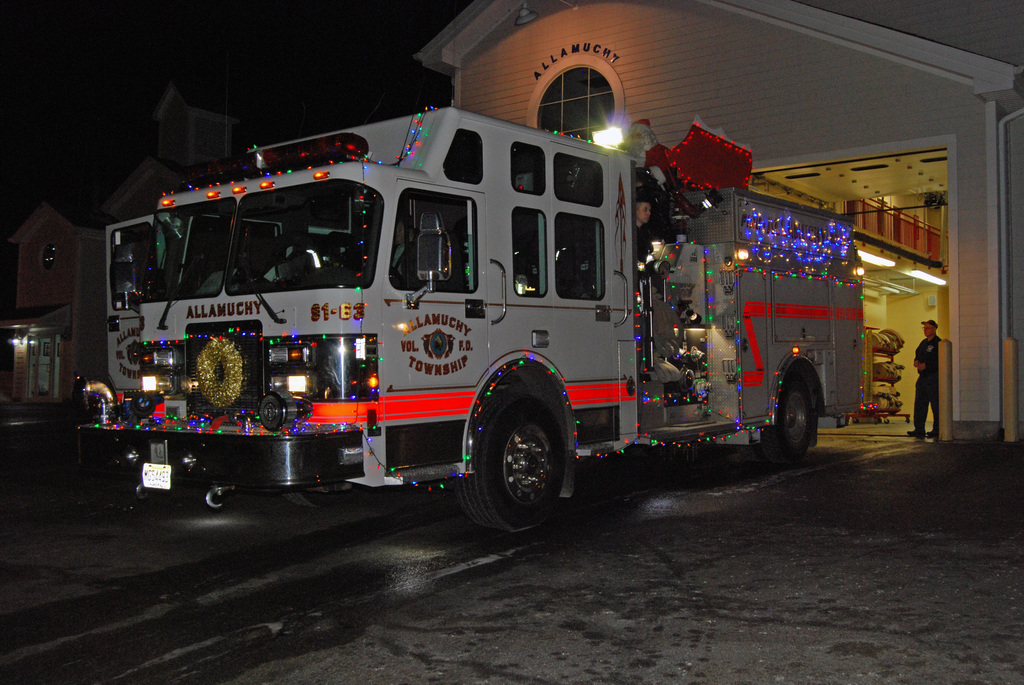 December 23, 2013 - The Allamuchy Fire Department was able to schedule Santa to visit the town on December 15-21st, to hand deliver candy canes and gifts to all the good little boys and girls of the township. Starting with the ‘Breakfast with Santa’, a day after a 10” snow storm hit the state of New Jersey, the fire department was able to get everything cleaned up and ready to go to serve the… November 23, 2013 – On Saturday morning, Allamuchy Green Township Fire Departments got together for a “Mayday” mutual aid drill held at the Allamuchy firehouse. Under the supervision of Warren County Fire Academy instructors, firefighters from Allamuchy and Green participated in a mask confidence course (a course located in the basement of the Allamuchy firehouse) to… November 8, 2013 – The Allamuchy Township Volunteer Fire Department hosted Fire Prevention Day at the Allamuchy Grammar Schools on Friday November 15th. As usual, Sparky paid a visit and shared time with the students. He was kind enough to leave each student fire prevention materials to bring home.

The general theme for the older children was “Fire Prevention and Babysitting”. As… 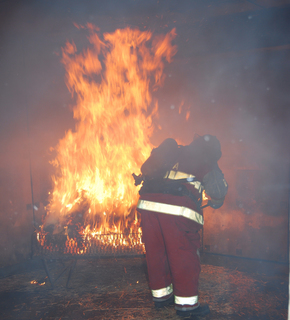 October 29, 2013 – Allamuchy Firefighters attended a drill at the Warren County Fire Academy to practice structural firefighting, and what it feels like to be in a ‘hot’ room. The crew went over a variety of fire scenarios, rescue tactics, and ventilation.
See more… 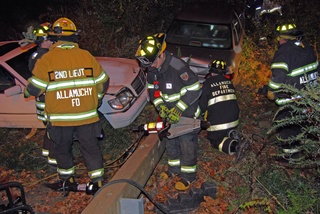 October 22, 2013 – Allamuchy Firefighters were alerted at around 7:30pm for a reported motor vehicle accident with confirmed entrapment and ejection. Together with Allamuchy-Green Rescue, firefighters responded to the incident and confirmed two cars involved with multiple entrapments and ejections. This was the scenario for the evenings drill.

Firefighters practiced a variety of… October 26, 2013 – Allamuchy Firefighters got together Saturday morning for a drill at the Morris County Fire Academy to practice structural firefighting. The crew went over a variety of fire scenarios, rescue tactics, and ventilation. Upon the completion of the drill, the crew discussed the operations they conducted and how they can better themselves.… 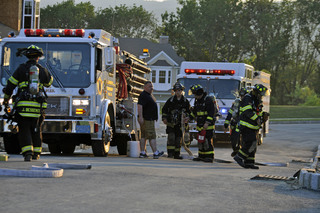 July 16, 2013 - Allamuchy Fire was dispatched for a reported motor vehicle accident involving a tanker truck with fluids leaking and possible entrapment. As company officers arrived on scene, it was confirmed that one individual was trapped in a car and the tanker was heavily leaking gasoline from its primary tank.

This was the scenario for a drill… July 4, 2013 - Allamuchy firefighters were alerted at around 11:30am to set up a landing zone for a medivac call, requested by Allamuchy-Green first aid squad.

Arriving engine 91-63 and its crew established the zone and provided support for the squad. Air-Three landed and took off safely, and all fire units were clear of the scene shortly…